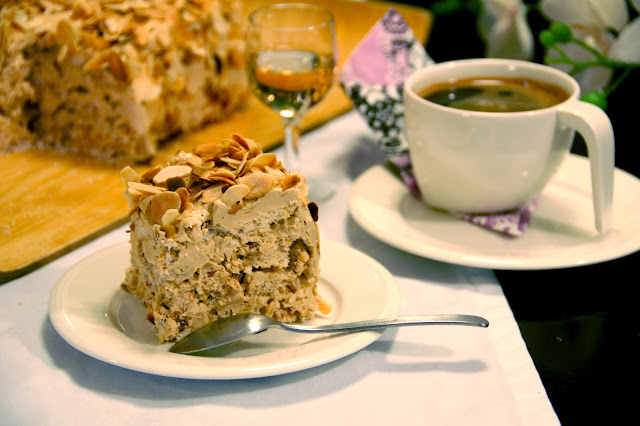 This cake is so sweet that you'll probably have a sugar rush for a whole week after you've had this. That obviously gives an indication that it's also very good. If you're on a diet, then this is not for you either. The whole cake has over 5000 calories in it. There's no certainty of where this cake has originated, but in the current form it was officially introduced by the wife of Finland's third president. Thus the name Ellen Svinhufvud's cake. 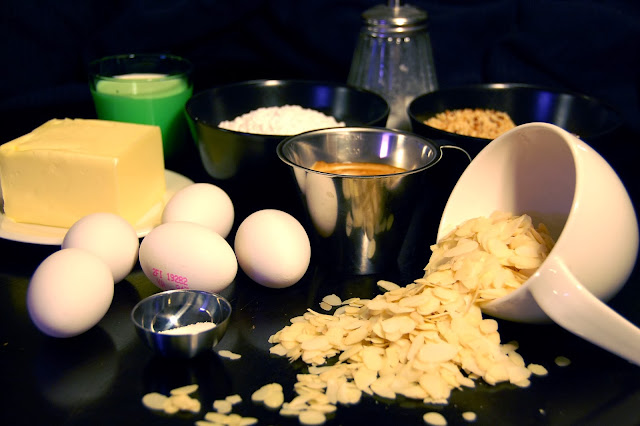 But let's start shall we. Begin the process by separating 5 egg whites. You won't be needing the egg yolks this time. Beat the egg whites together with 200 grams of powdered sugar. Beat until the "foam" is hard and won't escape the bowl even if you turn it quickly upside down. Add crushed almonds and nuts and mix carefully. Don't use a mixer when you're adding the nuts and almonds, because that could destroy the consistency of the egg white foam. 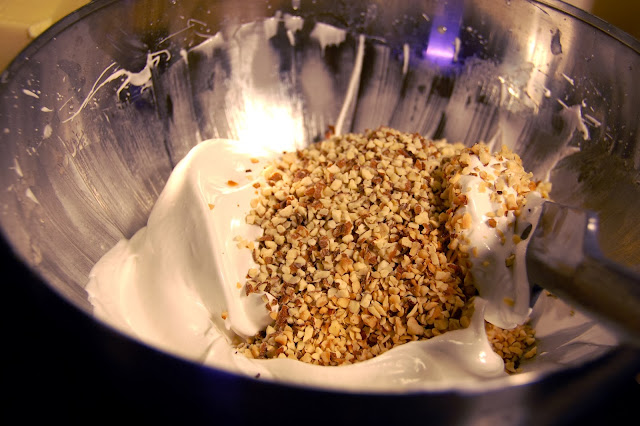 The mix is really good by itself , but try not to eat it all by itself. It will be needed for the cake. Spread it evenly on a parchment paper (the kind which is used for baking) which is on a baking tray. Put the tray in the oven that has been preheated to 125 Celsius. Let it stay there for about an hour, maybe a little longer. Keep your eye on the meringue so that it won't burn. 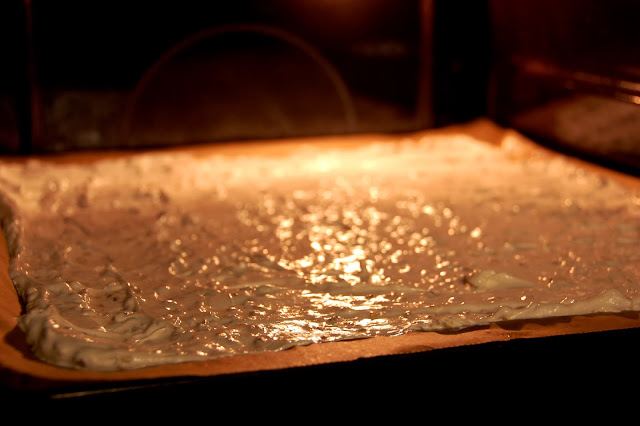 While the meringue is in the oven, feel free to treat yourself for a cup of coffee. While you're at it, make another cup for the cake. It can be pretty strong so the flavor really come through later. Mix 1,5 desilitres of coffee, 1,5 desiltres of cream and approximately 1 desilitre of sugar together. Add a tea spoon of salt as well. In the end you should have a nice buttercream as a result. 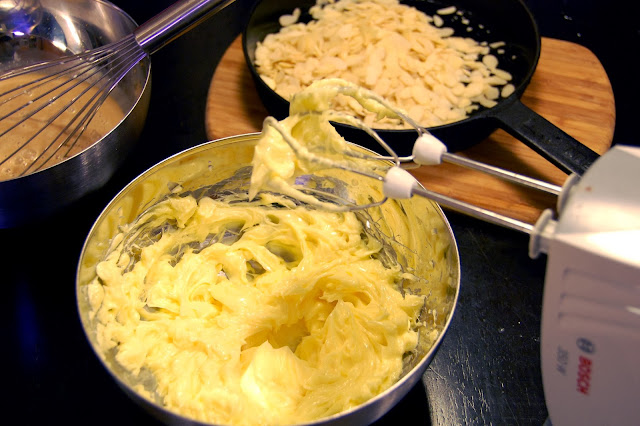 Next you'll need 300 grams of room temperature butter. So erm... you'll need to take it out from the fridge well in advance. You can cheat a little bit like we did and put it in the microwave for a while. But not too long, because you don't want it to be boiling hot.

Now you'll need the mixer again as you need to mix the butter, coffee and cream. Don't go too fast or it'll all end up everywhere except for the bowl. And as a preparation for the finishing touches on the cake, you can now roast some almond chips. They do burn easily so be careful with them. 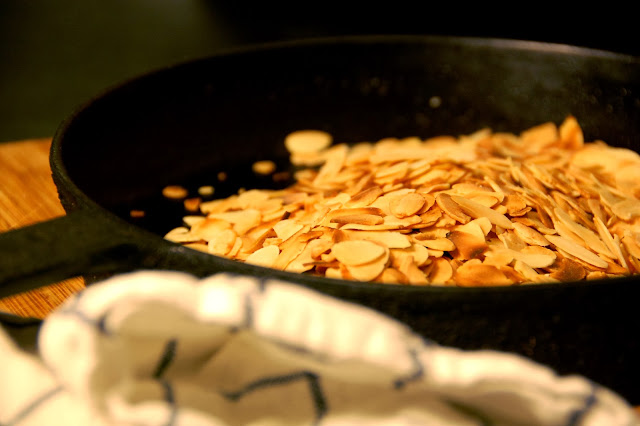 Once the meringue is ready, take it out of the oven and let it cool down. After it's cool, you'll need to cut it into 4 somewhat equal pieces. A pizza slicer works quite well for this purpose. After that you still need to separate the meringue from the parchment paper which can be slightly challenging. 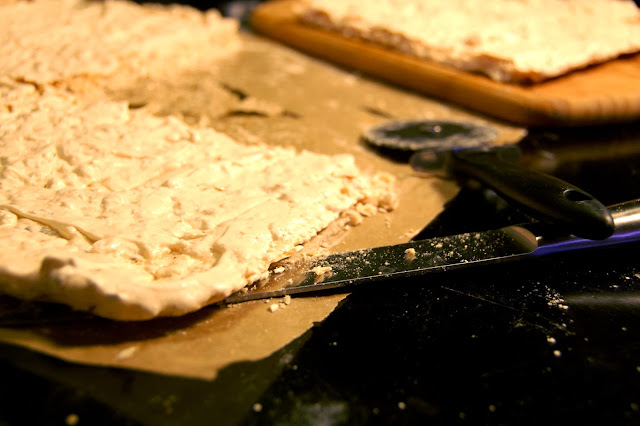 The next step is just like laying bricks on a wall. Place a piece of meringue on the bottom and cover that with the buttercream. Add another piece of meringue and repeat until you have used all the 4 pieces. You should still have some buttercream left as you should now ice the cake with that, so that it looks somewhat even from all sides. Throw the roasted almond chips at the cake so they'll cover the cake nicely. 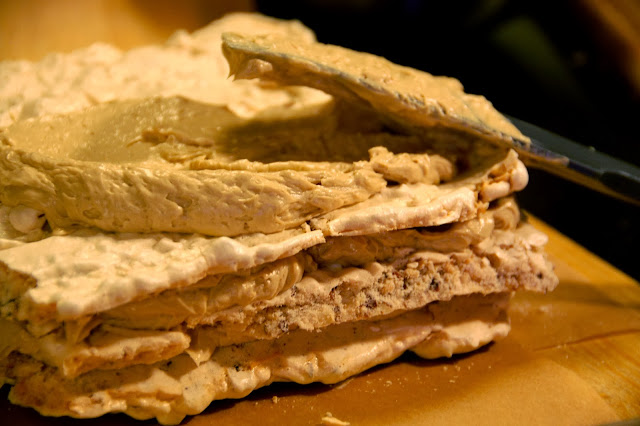 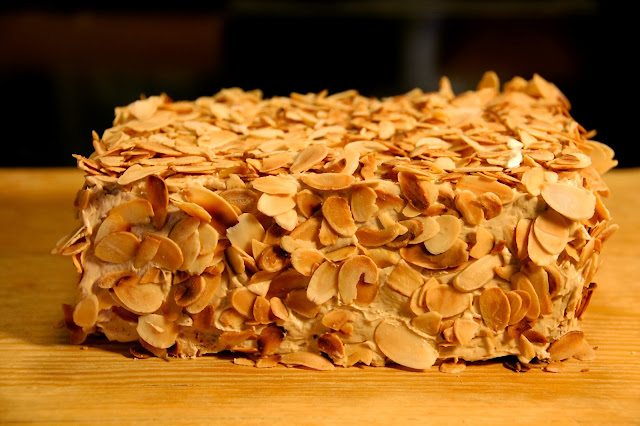 We would suggest inviting people over, because this will indeed last a long time if you're eating it alone. It can technically be frozen, but it's not at its best after that. Thus it's great for family functions where you'll have a bigger group of people together.

Beat the egg yolks and powdered sugar as a hard foam. Add the crushed almonds and hazel nuts and fold them in carefully. Pour the to-be-meringue on a parchment paper on a oven tray and spread it evenly. Bake in 125 Celsius for about an hour. Let cool down and cut into four equal pieces. Melt sugar into the coffee and add cream. Mix the coffee with room temperature butter and mix. Place the pieces of meringue on top of each other, adding butter cream in between the layers. Ice the cake with the remaining butter cream and decorate with roasted almond chips.
Posted by Unknown at 09:20